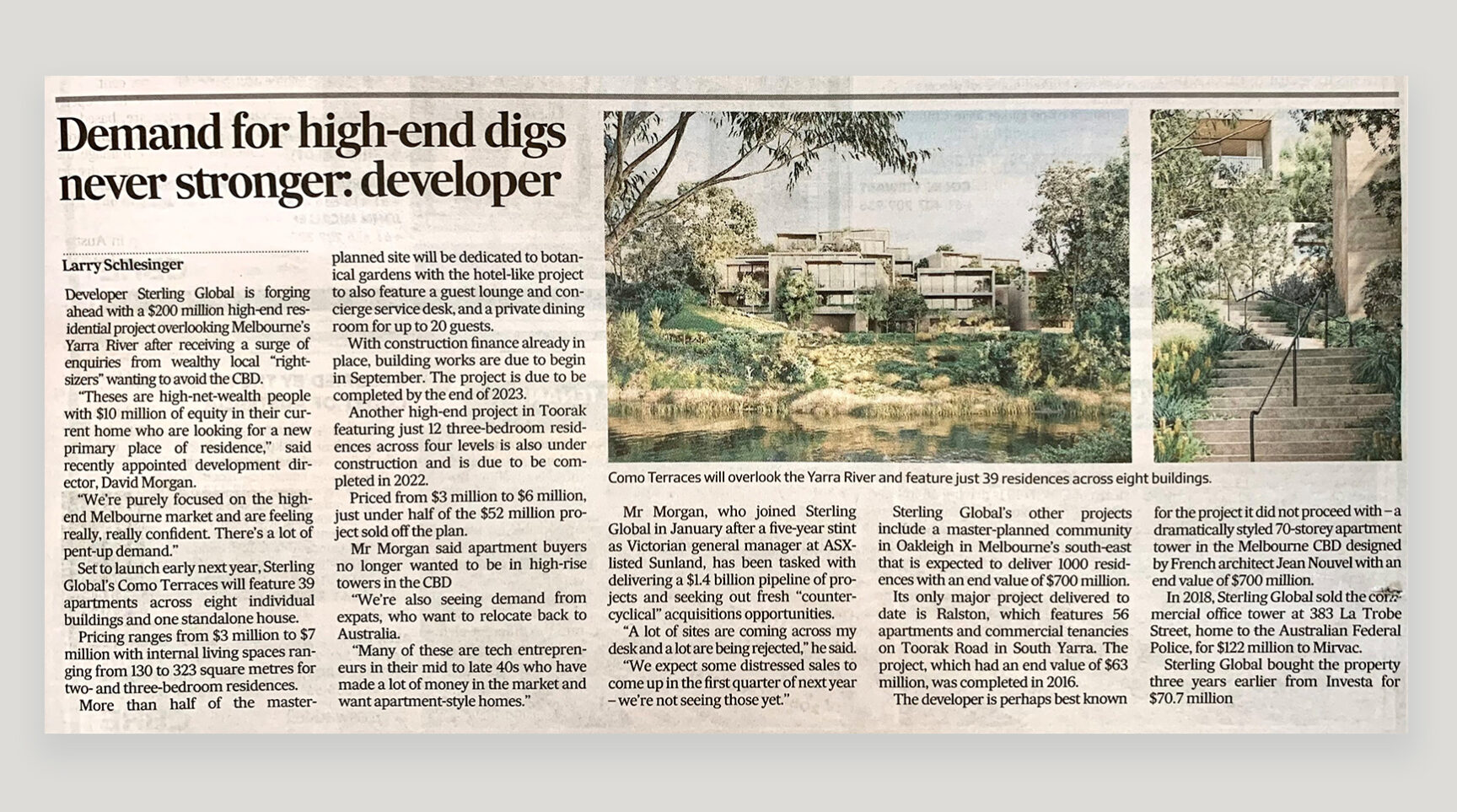 Developer Sterling Global is forging ahead with a $200 million high-end residential project overlooking Melbourne’s Yarra River after receiving a surge of enquiries from wealthy local “right-sizers” wanting to avoid the CBD.

“Theses are high-net-wealth people with $10 million of equity in their current home who are looking for a new primary place of residence,” said recently appointed development director, David Morgan.

“We’re purely focused on the high-end Melbourne market and are feeling really, really confident. There’s a lot of pent-up demand.”

Pricing ranges from $2.5 million to $8 million with internal living spaces ranging from 130 to 323 square metres for two- and three-bedroom residences.

More than half of the master-planned site will be dedicated to botanical gardens with the hotel-like project to also feature a guest lounge and concierge service desk and a private dining room for up to 20 guests.

With construction finance already in place, building works are due to begin in September. The project is due to be completed by the end of 2023.

Another high-end project in Toorak featuring just 12 three-bedroom residences across four levels is also under construction and is due to be completed in 2022. Priced from $3 million to $6 million, just under half of the $52 million project sold off the plan.

Mr Morgan said apartment buyers no longer wanted to be in high-rise towers in the CBD.

“We’re also seeing demand from expats, who want to relocate back to Australia.

“Many of these are tech entrepreneurs in their mid to late 40s who have made a lot of money in the market and want apartment-style homes.”

Mr Morgan, who joined Sterling Global in January after a five-year stint as Victorian general manager at ASX-listed Sunland, has been tasked with delivering a $1.4 billion pipeline of projects and seeking out fresh “counter-cyclical” acquisitions opportunities.

“A lot of sites are coming across my desk and a lot are being rejected,” he said.

“We expect some distressed sales to come up in the first quarter of next year – we’re not seeing those yet.”

Sterling Global’s other projects include a master-planned community in Oakleigh in Melbourne’s south-east that is expected to deliver 1000 residences with an end value of $700 million.

Its only major project delivered to date is Ralston, which features 56 apartments and commercial tenancies on Toorak Road in South Yarra. The project, which had an end value of $63 million, was completed in 2016.

The developer is perhaps best known for the project it did not proceed with – a dramatically styled 70-storey apartment tower in the Melbourne CBD designed by French architect Jean Nouvel with an end value of $700 million.

In 2018, Sterling Global sold the commercial office tower at 383 La Trobe Street, home to the Australian Federal Police, for $122 million to Mirvac.

All Media Next Article